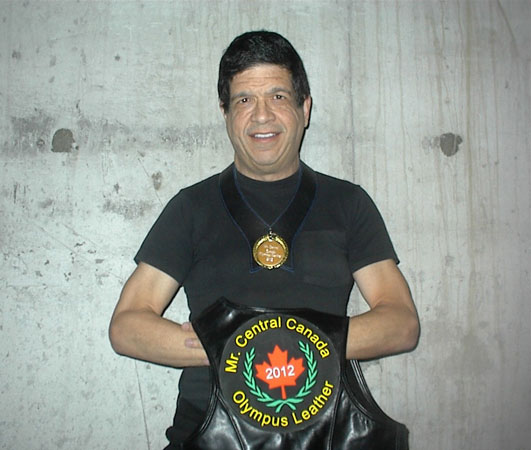 Since there was no new female titleholder, the outgoing Ms. Central Canada Olympus Leather 2011, Bad School Girl, will help out whenever she can.

The Ottawa Leather Fest weekend began on Friday night with "Three on the Third: Spanking, Paddling and Caning", as well as a fabulous show with Deedee Delight and her drag queens and kings.

The contestant interviews were held on Saturday morning, with Dave Rhodes, editor of The Leather Journal, as head judge. The other judges were Miss Jenn, Zelda Marshall, and the outgoing titleholders, Count Jeff and Bad School Girl.

The Olympus Leather contest itself took place on Saturday night, along with a kinky cabaret of entertaining numbers and skits, and the return of the transgendered best legs contest (won by Tina).

Several awards were presented. Among others, Ryder and slavejade won Total Power Exchange Couple of the Year. Mr-Bit and sueprize received the Community Builders Award for bringing a chapter of Masters and Slaves Together (M.A.S.T.) to Ottawa.

For her outstanding efforts on behalf of Olympus Leather and Mr. Leather Ottawa, Zelda Marshall won Fundraiser of the Year. She was also named L.A.D.Y. (Leather Ambassador in Drag of the Year) 2012.

A taste-tempting annual dinner at The Buzz, a local restaurant, wrapped up Ottawa Leather Fest weekend.